We are delighted that Cambridgeshire County Council have agreed to a substantial new building to accomodate our increasing pupil numbers. A time lapse camera has been installed on the roof of the Infant building so we can watch the progress of the building work. Please click here to access the camera. You will need to log on with these details User ID: kier and password: stivesschool 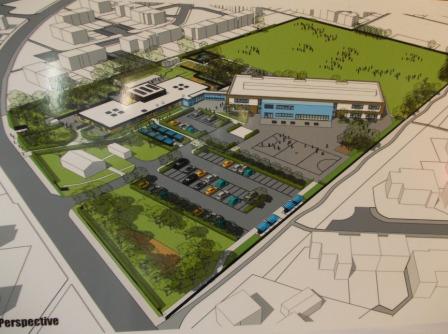 Reports from pupils after visiting the Site Office

On a Friday afternoon 4 pupils have the opportunity of visiting the Site Office and talking to the Senior Project Manager who explains what has been happening to the building during the week. Read some of their reports below:-

31 January 2014
We were told about the coring work that had been happening. This is to cut holes in the floor to allow the pipes to come up from the ground floor to the top floor. They have also been ‘chasing in’ on the bricks where the electrics are going.

24 January 2014
The steel weighs 157 tonnes and over 5000 bricks have been used. The builders have been busy insulating the roof and making it watertight. They have also been putting in the pipe work for the underfloor heating.

This week, the builders  fixed the  steel  floor. They used a concrete pour. 150 cubic metres of concrete was used. It is going to be a big building! We are very excited!!!We saw the first steel frame go up. It was epic! The building is our school and it has two storeys. It will be 27 metres wide and 8 metres high .When the building is finished it will be fascinating!!! Lots of materials are delivered in lorries  from Norwich. Norwich is far away.

13 December 2013
When the crane was here nobody needed to be inside it bacause it was remote controlled. The crane was 8m tall.
Outside there will be bird boxes, more trees will be planted and we will be having our own pond. There will also be a grass maze and a little ampitheatre.
The new bit of school will be finished in August 2014 so we can move in after the Summer holidays. The Junior building has to be knocked down so we can have a new playground.

In two weeks time they will be starting laying the bricks. They have built a massive drain in the corner of the field and it is as big as a swimming pool. In the other corner they have made a little hill so when we have a lot of rain it won’t flood the houses nearby.

4 October 2013
This week, the builders have finished foundations and have continued to install the steel work. They have begun to install the metal decking system that shows where the base of the floors and the walls will be. This week they’ve also been putting in the pumping chamber for the dirty water. The concrete stairs were delivered, which was exciting. They have started building the lift pit, which we were very happy about. They’re planning to knock this building down in the summer holidays. Hopefully we will be working in the new school by the Autumn Term.

By Nadine ,Georgina, Chloe  and Connor

We are having a new school being built this year at Thorndown. They have started to build the metal structure and have managed to put 8 columns and beams up in a day! The whole school went out onto the field to watch the first column being put up. They started on the 24th of July so the whole building will be done around August 2014 in time for the new school year!

First of all, they tested the soil to make sure it was the right kind. Then they layered out the foundations and to do that they had to dig up our mounds!!!!! Then they put the boards in for the drain work for the taps, toilets, sinks etc.

A lorry comes every other day bringing in the beams and columns weighing 1000kg.The concrete and steel reinforcement are the main supplies for the new school that are being delivered at the moment.

There will be 78 columns when the school is done.

All the steel work will weigh 125,000 tones. We can’t wait for the school building to be done and to find out what will happen next week!

By Dean, Hattie, William and Lauren